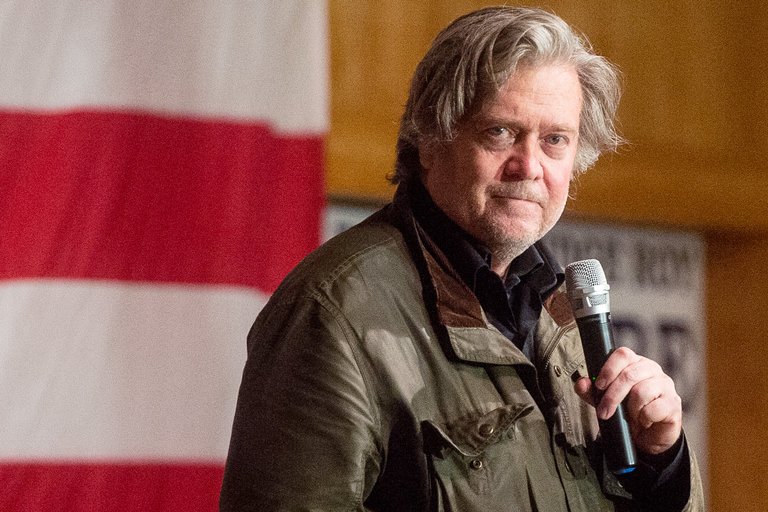 In what is shaping up to be a Dynasty-like showdown between Blake Carrington and Jeff Colby, Donald Trump and Steve Bannon were clawing at each other yesterday like two cats in heat. In what may be the biggest “Who’s crazier than whom?” of this decade, the Trump-Bannon feud is likely going to confirm once and for all that neither of them belong in the White House.

While Trump has no reputation as an avid reader of anything besides his Big Mac wrapper, he reportedly lost it yesterday afternoon when excerpts of Bannon’s new book, Fire and Fury: Inside the Trump White House, were shared with him. Trump immediately began denouncing his former colleague by saying that Bannon had “lost his mind” when he left the White House in 2017 and launched an anti-Bannon publicity tirade. By midafternoon, Sarah Sanders was claiming that the former chief strategist played almost no role in any Trump White House strategies.

In his new book, written by Michael Wolff, Bannon presents some rather candid and disturbing images of the Trump White House. His personal assessments of the Trump family are lacking any flattery as he paints Trump and his children as what could only be termed “unqualified monarchs in waiting.” His personal attacks are unequalled by anything heretofore seen published about any of the Trumps. On Wednesday, Bannon’s publicist said that the former Trump associate stands by all of his comments.

If what Bannon has recounted is true, he has captured the Trumps’ power grab for exactly its intent — claiming that Trump’s children argue about who will succeed him, with Ivanka Trump positioned to be the first woman president in America’s history within 16 years. Despite her aspirations to be quasi-queen, Bannon also describes Trump’s daughter and personal advisor, as “dumb as a brick.”

Most telling in the released excerpts is how Bannon characterizes an alleged meeting between Donald Trump, Jr. and Russian representatives in 2016. Trump and his team have denied any wrongdoing or meeting details from the nefarious June 2016 Trump Tower tête-a-tête. Bannon calls the meeting both “treasonous” and “unpatriotic.”

By Wednesday evening, Fire and Fury had reached the number one position on the bestseller list in preorders alone as a nation anxiously awaits the sordid details of the soap opera that is Washington politics in 2018.

While he may be as crazy as Donald Trump, Steve Bannon has none-the-less told his story. He has opened the mysterious doors of the inner workings of the Trump dynasty in the making, and like a jilted lover or future prince, turned the tables on Trump. His credibility is questionable, but then again, so is the credibility of the man who has told more than 1,500 verifiable lies since last January. It gets tough trying to figure out whom to believe between Trump and Bannon.

Both men have one common theme to their insanity — a demonstrated intent to dismantle and disable the democratic processes of the United States. One calls the other a traitor while campaigning for candidates who practically spit upon the Constitution. The other relies on alternative facts to boost his ego.

This soap opera is not going to have a happy ending for Bannon or Trump, but it may result in a great season for Americas voters who are tired of both men.

The nation watches in dismay as two spoiled brats slap and spat on the playground, wishing they had a dick big enough between them to swing. Donald Trump has finally graduated from The Apprentice to a Dynasty remake and Steve Bannon has found a new talent as a catty soap-star. In both cases it is a disgusting state of affairs that Trump’s base is going to eat up like a free pay-per-view episode of WrestleMania and the rest of us are going to apologize for to the world: “Donald Trump does not represent who we are as a nation…we promise.”

Finally, Trump has again achieved the dubious recognition of a man who accomplishes nothing. He is like a fabled character moving a dune of sand grain by grain with a pair of tweezers. After a week of tweeting about getting back to work, Trump will spend the next month battling with Bannon in such a display of irate cynicism that it may actually feel like work to him. For America, it will be more than work…it will be a burden to bear.