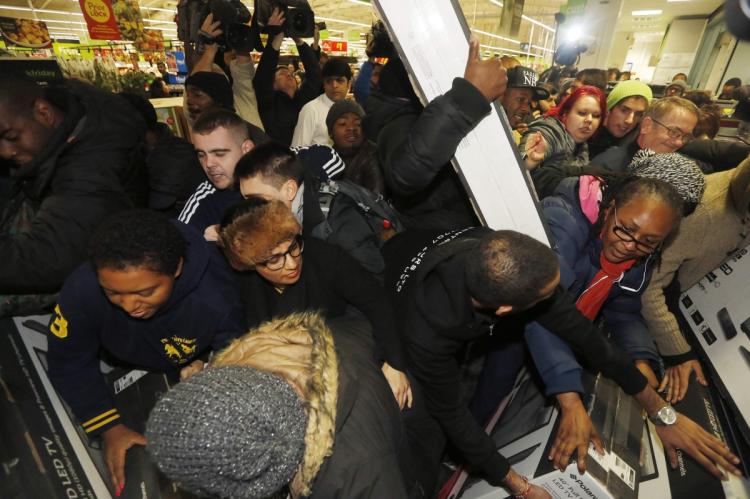 Black Friday…that wonderful American tradition when we show the rest of the world how prosperous our nation is by diving down shopping aisles, rioting in malls, and fighting over one available television to save money. When the Soviets did it for bread in the 70s and 80s, our nation ridiculed them, but since we do it for consumer electronics it is more acceptable and trendy chic.

There is some irony in the fact that yesterday Donald Trump bragged to U.S. troops stationed overseas that the stock market is flourishing and that they would return to, “Jobs, jobs, jobs!” The stock market may be breaking records, but for most Americans, it is a meaningless statistic. As for jobs, they are available, but do not pay enough for the average American to avoid the Black Friday carnage necessary to purchase gifts.

As an indicator of the economy, we would like to see the end of Black Friday. Eliminating the Thanksgiving Day shopping scrum and retail money grub would prove to be a better measure of the state of our economy than manipulated numbers and data.

The real reflection of the American economy can be found beyond the Black Friday deals and in the pleas for donations for Toys for Tots, local food banks, the Salvation Army, and every other organization that is competing this holiday season to ensure that every child in America has a warm meal, jacket, and at least a toy. As winter approaches in the colder climates of the country, there are more faces on the street this year than last.

Homelessness is an American epidemic, with almost 600,000 homeless people — one quarter of them innocent children — on the nation’s streets. In a nation with a $16 trillion GDP, it is absurd that we have anyone unable to afford basic housing, warm clothing, and food.

Donald Trump would not know anything about the number of homeless people, hungry children, or freezing veterans in the country. He is too busy with golf, Twitter, and counting his stock market gains to understand the real impacts of the economy and what average Americans struggle with daily. His idea of a strong economy is likely watching Fox News coverage of a Black Friday sale that looks more like a rerun of “Fight Club.”

While Black Friday kicks of a one-month shopping season that can account for 30-40% of a retailer’s annual sales, the trend is a disturbing one that reflects the reality of 11 other months of the year. The number of people braving crowds on Black Friday has been increasing…along with public conflicts and confrontations. Last year, 107 million Americans began leaving their family Thanksgiving meal on Thursday evening to participate in Black Friday events.

Each year, the holidays are marred by fistfights, arrests, and broken dreams. Sane Americans are not flocking to Black Friday sales simply for the joys of shopping. An element of desperate necessity skews the economic equation.

As this year’s stampede begins, we would like to envision a better America in the coming years: a nation where children have a place to call home and parents don’t have to risk bodily harm to purchase gifts — especially after Trump and the GOP strip them of their hospital care. We would like to see more than a booming stock market and witness the reduction of the chasm-like economic divide.

On the other hand, if Black Friday is a necessity that is going to continue, at least let us see Donald and Ivanka Trump freezing in line at the local Wal-Mart next year at 3 a.m. A bit of reality for the former reality-television host might be just what he needs to stop tweeting about things he does not understand.