Over 70 million Americans have a criminal record. That means that one in three adults — about the same ratio as have college degrees — has been convicted of either a misdemeanor or felony. A 2012 Princeton study citing U.S. Department of Justice statistics reported that 14.5% percent of adults in the United States — close to 20 million people — have a felonious criminal record that will follow them for the rest of their lives.

Criminal disenfranchisement used to affect those 20 million by automatically stripping them of the right to vote. In recent decades, more progressive policies on disenfranchisement have prevailed, restoring the right to vote for many men and women who have completed their prison sentences and parole requirements. However, over 2 million Americans behind bars still cannot vote.

One of the most important takeaways from last Tuesday’s election comes from a local district attorney race in Philadelphia. Voters there did what no political analyst — or the winning candidate — predicted or imagined could be done. They took back a city where tough-on-crime district attorneys had dictated policy for over 25 years. Lynne Abraham ruled the city’s courts from 1991 to 2010 and the New York Times dubbed her the “deadliest D.A.” in America.

Philadelphia voters overwhelmingly approved a new progressive-minded prosecutor with a long history of civil rights litigation. Larry Krasner may have had the support of the people, but he did not have criminal justice officials on his side during the run-up to the election. An advocate for ending mass incarceration, and a representative of Black Live Matter and Occupy Philadelphia movements, Krasner himself once said he was an “unelectable” candidate for office. He has vowed to change how crimes are prosecuted in a city plagued by crime and incarceration. 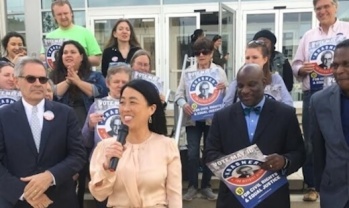 As of the end of October, the Pennsylvania Department of Corrections had a population of over 50,000 prisoners. Philadelphia’s decrepit correctional facility is always at capacity with almost 3,000 city residents serving time or awaiting trial. Across the state, thousands more languish in county jails. None of the men and women serving time in Pennsylvania is able to vote until they are released. They are the voiceless members of society.

The election results in Philadelphia will mostly affect residents of the fifth largest city in America, but there will be ripple effects, too. Local district attorneys play a significant role in setting prosecutorial policies that courts sometimes take under consideration. At the local level, the district attorney’s choices ultimately decide whom they will prosecute under what statutes and how long a convict will serve in prison.

With 87% of the nation’s criminal cases handled in state courts, city and county prosecutors set precedents that affect their jurisdictions and sometimes others. Despite legislation to reduce prison populations, prosecutors still dictate the charges and sentencing to refill cells at the state penitentiary. A case study in 2012 cited how South Dakota prosecutors increased the state’s felony convictions by 25% in the middle of a two-year effort to downsize the prisons.

For 20 years, D.A. Lynne Abraham held Philadelphia defendants in the grasp of her uncompassionate iron fist. She filled Pennsylvania’s prisons to the breaking point with typical “throw the book at ‘em” prosecutions. With Krasner’s ascension to the city’s top post, that is about to change. He has said that he will not demand cash bails for low-level crimes and is anti-death penalty. He has also vowed not to pursue cases based on illegal searches and seizures — a problematic practice in the Philadelphia Police Department.

However, the most significant progress that Krasner could achieve as the city’s top criminal justice official will be to right the wrongs perpetrated by his predecessors. His voice will be for Philadelphia, but may echo across the state’s county and appellate courts.

In 2012, the United States Supreme Court ruled in Miller v. Alabama that the sentencing juvenile defendants to life in prison without the possibility of parole violated the constitution on several counts. Since then, Pennsylvania’s juvenile lifers have faced an uphill battle to find closure on the Court’s ruling. Some have been slowly dying in prison for more than 35 years after being sentenced to life at the unconceivable age of 15 years old. Over 300 are from Philadelphia, which has sent more children to serve life in prison than any other city in the country.

For five years, many local prosecutors in Pennsylvania have been opposing the release of any juvenile lifers — including former Philadelphia D.A. Seth Williams who flip-flopped on the issue. In amicus briefs and petitions to appellate courts, district attorneys have the ability to slow the release process.

Krasner’s progressive ideals may provide some relief for the men and women still waiting for the trickle down effects of the Supreme Court’s ruling in five years ago. By not opposing the releases and honoring the law of the land, Krasner has the opportunity to hold true to his campaign promises to end mass incarceration and change the way Philadelphia pursues justice.

In a country so small as to account for only 5% of the world’s population, there is no reason the United States — a developed democratic and industrialized nation — should be home to 25% of the global prison population. Only in American criminal justice have we built the pyramid upside down. The time has come to tip it over and retire ineffective tough on crime policies inspired only by the ballot boxes.

The residents of Philadelphia gave 50,000 men and women hope this week. They spoke loudly and clearly for the voiceless by rejecting the decades-old draconian policies of prosecutors who had no interest in justice, only retribution and the infamous recognition of being the deadliest in the nation. For those who Krasner may help see the light of day for the first time since the 1970s, the election results are like a childhood dream finally come true.