Yesterday, a Wisconsin jury determined that a 15-year-old girl was mentally ill when she participated in the 2014 stabbing of a classmate. Authorities charged Anissa Weier with second-degree homicide when she was just twelve after she and a friend lured another girl to a secluded area and stabbed her at the behest of a fictional internet character.

The so-called “Slenderman” case gained national attention, not only for the horrific nature of the crime, but also because an online urban legend inspired the attempted murder and because the victim survived the attack. Weier entered a plea last month, but claimed she was not responsible for her actions on the grounds of insanity. After the jury’s verdict on Saturday, Weier will be held in a state mental facility for at least three years, at which time she will be evaluated and a court will determine civil commitment.

Prosecutors in Wisconsin were disappointed by the verdict, maintaining that the young girl knew what she was doing when she was 12-years-old and that she knew it was wrong. Pursuant to Wisconsin law, prosecutors charged Weier, and a second girl, Morgan Geyser, as adults. Like many American states, Wisconsin law provides that any child over the age of ten who is charged with a serious felony may be tried as an adult.

In many states, children — even those less than 10-years-old  — facing murder or other felony charges may be prosecuted as adults. This means that elementary and middle school children are responsible for making legal decisions about their defense (because every elementary school class teaches procedural court rules alongside basic spelling and grammar) and be considered to have a fully developed psychology.

While the Wisconsin jury made the right decision in the Slenderman case, many children do not have the same good fortune. Over 250,000 youth are tried in criminal courts each year in the United States. The least fortunate of those will never live outside of prison. According to the Sentencing Project, over 2,500 men, women, and children in the U.S. are already languishing in prisons until their natural death.

Other statistics indicate that 100,000 more children will serve years of prison time for crimes that they were allegedly responsible for as juveniles .Up to 10,000 children will be incarcerated in adult prisons with hardened adult convicts. The two girls in the Slenderman case would face up to 65 years in prison under Wisconsin’s adult sentencing guidelines, and many other children share the same fate when tried in an adult court system.

How a nation treats its children is often a measure of how advanced the society is. In America, the law protects children under age 14 in practically every area except criminal prosecution. The United States has a poor record vis-à-vis juvenile justice and remains the only nation on the planet to exercise life without parole sentences for juveniles. Additionally, almost all U.S. state and federal courts permit juveniles to be prosecuted as adults — either statutorily or at the discretion of the court. An investigative report by Human Rights Watch places some U.S. jurisdictions’ treatment of minors in the company of notorious human rights abusers like Cuba, Saudi Arabia, Ethiopia, and the Ukraine. 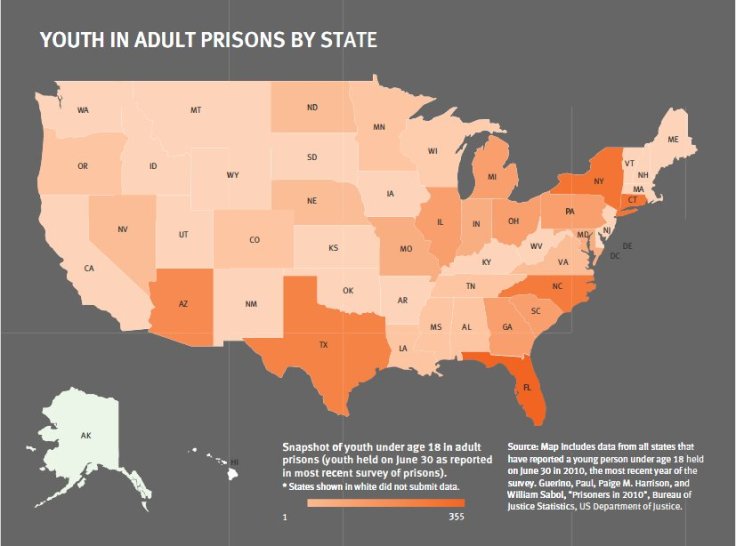 A ‘get tough on crime’ attitude among lawmakers is one reason why police and prosecutors treat America’s children like adults in an already broken criminal justice system. Despite calls for reform, and a long line of Supreme Court cases in the past decade, the treatment of teenagers and children — some just old enough to attend elementary school — by U.S. courts is a black mark on the nation’s respect for basic human rights. In 41 states, a minor cannot even be tried in juvenile court since most states set the maximum age for juvenile matters at 17 or less. In New York and North Carolina, prosecutors automatically charge anyone over the age of 15 as an adult for any crime.

Though most U.S. jurisdictions have established provisions for juvenile courts, heavy-handed prosecutors continue to push children through adult courts, using discretionary rules to remove the cases to regular criminal courts. When a child is prosecuted as an adult, as in the Wisconsin case, the law removes family involvement in rehabilitation and treatment. With limited input and support, a child loses the most important guiding force in her life: parents.

Additionally, repeated studies demonstrate that from violent crime to petty misdemeanors, juvenile placement in adult prison and juvenile residential programs are ineffective. Children railroaded into adult prisons face obstacles that no decent human should ever consider imposing on a child. Children become targets of abuse and violence, and receive inadequate moral, emotional, and physical sustenance. A child accused of a crime is not lost because she commits a crime; she is lost because American politicians use her as a pawn in a broken game of chess.

Many juvenile defendants spend excessive time behind bars even before trial, and often in adult jails. One in five juvenile defendants will spend at least six months in an adult jail before trial — long enough to make recovery nearly impossible. In the Slenderman case, Weier has been in confinement for three years since she was 12-years-old. Unless it is a high profile case, a majority of juvenile defendants are held in facilities with no access to mental health evaluations. Compounding the injustice, Department of Justice task force reports have found instances of use of excessive force and inappropriate restraints on children in New York, Ohio, and California. The results suggest a highly disturbing nationwide trend.

Last June, a 14-year-old boy threw a rock in the direction of police during a political rally in New Mexico. State prosecutors charged the boy as an adult with two serious felonies. Local law enforcement claimed that no one “wanted to make an example” of the boy, but only sought to “guide him.” The boy’s attorney disagreed with that statement, highlighting the atrocity of the system by saying the prosecution and police were “trying to destroy this child.”

Five years ago, the Supreme Court of the United States declared mandatory juvenile life without parole sentences unconstitutional. Writing for the majority in Miller v. Alabama and Jackson v. Hobbs (132 S.Ct. 2455), Justice Elena Kagan acknowledged the scientific consensus that the human brain does not develop until much later than previously thought — as late as 25-years-old. The Court recognized that adolescence is marked by “transient rashness, proclivity for risk, and inability to assess consequences.” The Miller decision is the latest in a line of cases reversing the draconian treatment of children in the criminal justice system, including outlawing juvenile death sentences. (Yes, in the 2000s America still supported putting children to death.)

The inherent and legally recognized “inability to assess consequences” removes the bald claim by prosecutors that juveniles know right from wrong when committing a crime. The Slenderman case demonstrates a continuing major flaw in the U.S. criminal justice system in its treatment of minors as adult defendants, and the heartlessness of prosecutors who would throw away children’s lives for want of a headline or a vote. Justice is not a popularity contest or fictional Hunger Game.

Anissa Weier was found mentally incapacitated. That insanity may be the key to preserving her life and opportunity to become an adult casts serious questions on the mental stability of the police, prosecutors, judges, and lawmakers responsible for the criminal justice system. When the people making the laws seem crazier than the accused, there is something wrong.

What Weier and Geyser did is not justifiable, regardless of what made them commit a terrible crime. However, before we hold innocent children to higher standards as adults, we must, as a civilized society, demand that our government leaders implement policy decisions that do not appear to be the influence of Slenderman or any other fictional friend. If we as a nation are going to criminalize being childish, rash, and making irrational decisions, then perhaps the first people we need to prosecute are prosecutors without compassion and a president who acts like an insane child-king.