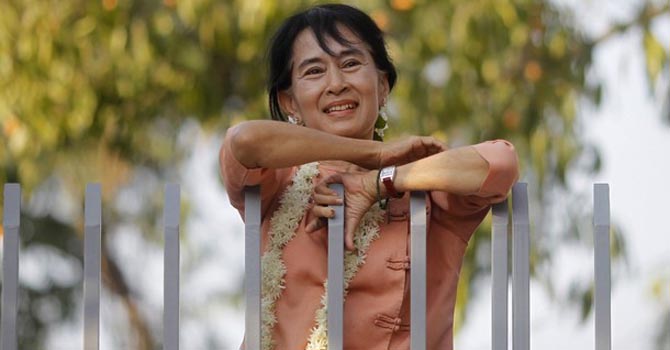 For decades, the world has watched the plight of Myanmar human rights leader and current Chancellor Aung San Suu Kyi as she fought for peace, equality, and democratic values against a corrupt dictatorship in her homeland. A champion who endured the harshest criticism and treatment for speaking her mind, Suu Kyi never wavered in her campaign, demonstrating the resolve of a grizzled war veteran when faced with imprisonment, house arrest, and punishment by Myanmar’s military regime.

In 1991, the Nobel Committee awarded Suu Kyi the Peace Prize for her undying efforts to transform Myanmar from a bitter faction-ravaged nation where oppression ruled, to a democratic beacon in an unstable region of the globe. She spent 15 years in confinement before her dramatic release from government custody and sudden rise to the top of the institution she once condemned.

As head of state, Suu Kyi does not have an easy job. She inherited a wide range of social, economic, and human rights crises — including the ongoing oppression of ethnic minority Muslims in Rakhine State. After decades of tension between government forces and Rohingya Muslims, violence flared again last week. Though remote and fiercely guarded by the government, reports surfaced of unconscionable violence being waged against the Muslim minority.

A nation predominantly comprised of various Buddhists, Myanmar recognizes 135 different ethnic groups among its population. However, the Rohingya Muslims are not acknowledged as a Burmese (Myanmar is formerly known as Burma) national ethnic group. As a result, they suffer the harshest treatment of any minority in the country.  Some human rights groups refer to the Rohingya as the most persecuted minority in the world.

Ethnic minorities in Myanmar have struggled to gain fair and equal treatment since the time of British Rule. A year before independence, leaders drafted a national accord to ensure equitable treatment of all ethnic minorities in the Myanmar Frontier areas. However, in 1947, only months after various representatives endorsed the agreement, the nation’s leader Gen. Aung San — Suu Kyi’s father — was assassinated. In the subsequent 60 years, no civilian or military government of Myanmar has honored the accord.

The Myanmar Rohingya number just over one million people and they have lived in the region surrounding Rakhine since the 12th century. When Myanmar gained sovereignty from Great Britain in 1948, and through subsequent iterations of the nation’s constitution, law, and reorganization, the Rohingya have repeatedly been excluded as citizens. The lack of government recognition has left the Rohingya stateless with few legal rights, if any, and highly oppressed and abused. They are the model people that Suu Kyi suffered for in her relentless advocacy, but has now forgotten.

Though Suu Kyi has championed a Myanmar without oppression where all ethnic groups enjoy the same civil and human rights, she has been unable to stem the ethnic atrocities in Rakhine. As chancellor, she has no control of the military, but the formerly out-spoken Nobel Laureate has been unusually silent on the issue of the Rohingya, refusing to issue a statement condemning the military’s repeated abuses of the people.

During recent crackdowns to unseat the Rohingya, United Nations and NGO agencies have reported a continuing pattern of ethnic attacks by the Myanmar military. Over 400 Rohingya Muslims have been murdered; women and children have been driven from encampments; and the military is accused of setting children afire. Aid workers in the Rakhine region claim that Myanmar officials have cut off supply lines and prevented workers and observers from visiting the area with needed supplies and support.

Most disturbing in the growing humanitarian crisis is that Suu Kyi has been dismissive of claims of genocide, torture, rape, and other atrocities carried out by the Myanmar military. Instead of demanding investigation, offering apology, or condemning reports of abuse, Suu Kyi has disappointed her former devotees by denying events happened. She has even blamed the Rohingya for exaggerating government attacks and lying to the press and human rights observers. For those who stood by Suu Kyi for decades, her adoption of Trump tactics is a devastating blow.

The number of ethnic — or people groups — globally is a much-debated subject. Experts are often loathe to agree on the very definitions of the groups they are categorizing. Current numbers range anywhere from 13,000 to 24,000 different ethnicities on the planet. With only 195 countries, it is a mathematical impossibility that each ethnic group has its own nation — even if so, there would still be global war for territory.

In recent months, divisiveness fueled by Donald Trump’s ignorance and bigotry has consumed the United States. America’s own difficulties demonstrate that even in established democracies and industrialized nations, it is difficult to attain a peaceful and homogenous existence. In places like Myanmar, oppression and schism is more violent, more acrimonious, and more destructive. However, whether it is the murder of a protester in Charlottesville or 400 Rohingya Muslims in Rakhine, the lesson is the same.

Human rights must be universal.

Equality alone is not the strongest principle of democracy and peace is not the glue that binds a nation’s people. Regardless of what ethnic group, skin color, belief, sex, orientation, or other inconsequential difference, the driving values for unity and continued human existence remain as tolerance and respect. Without these, the most perfect democracy will fail, and the most peaceful religion will trample innocent lives.

A crisis is reaching its tipping point in Myanmar and another is brewing in America. One leader has been outspoken against oppression, and the other has promoted an agenda of hate, but each can learn from the other and the world can learn from both. Aung San Suu Kyi must regain her voice and learn from Trump how not to react; and Trump must adopt Suu Kyi’s selflessness agenda for human rights. Right now, both have a long way to go to before either nation finds unity again.