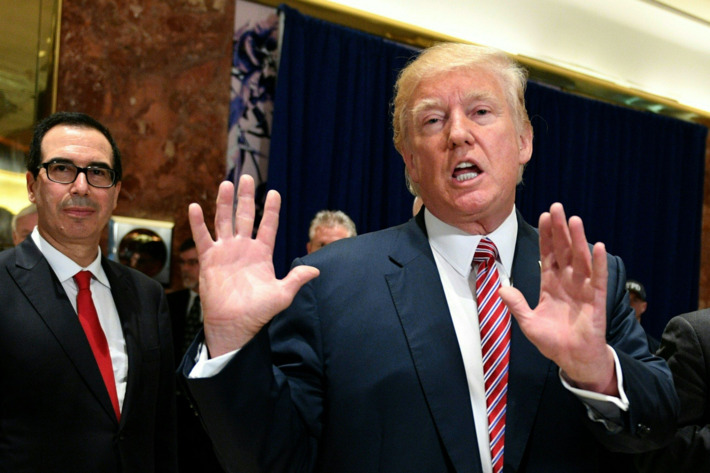 We have been saying this for months in one way or another. We hear it on the streets, in restaurants, and among family and friends. The media has been building toward the “Full Monty” on Trump, but there is still a bit of a delicate dance between the press and the White House. However, we are not the ones — the mothers and fathers, sisters and brothers — who need to say what is wrong with Trump.

Following the Charlottesville white nationalist riots, Trump’s critics demanded he condemn — by name — the neo-Nazis, supremacists, KKK, and other hate groups responsible for the weekend’s violence. Now, the time has come for Washington politicians of every race, religion, sex, affiliation, persuasion, and slant to do what they demanded of Trump: Name the evil.

An overwhelming majority of America knows that racism is immoral, and that white nationalism does not represent the accepted principles and mores of our country. We do not need to be told that hate groups’ anti-American sentiments are “condemned” or “not tolerated.” We denounce them with our protests; by not joining gangs who don hoods and carry torches; and by how we treat our neighbors — without a thought of skin color or ignorant prejudices.

With the exception of Paul Ryan, Mitch McConnell, and a few other soulless GOPers who cannot be salvaged from the wreckage of the S.S. Trump, America wants and demands that its representative leaders denounce by name, Donald Trump. Stop condemning the generalities and condemn the general. Trump is not going to change his ignorant and racists views and beliefs because of your patience.

Trump did not goosestep down Main Street this weekend, but his comments Tuesday demonstrate that, in mind and spirit, he marched proudly in Charlottesville on Saturday. While Trump has maintained he is not taking sides in the nationalist question and scandal, his self-professed inaction is a corrupt and sickening confirmation of hate. A leader who cannot take a side, is a leader who lacks the personal conviction and courage necessary to the position. Trump has demonstrated himself ineffective and impotent, not only because of his lack of morality, but because he walks the fence like a terrified cat avoiding the dogs.

In addition to his wavering and weakness, in each instance of error, Trump defends himself by attacking our nation’s core principles and founders. Tuesday afternoon was no exception as he derided the press and equated the Founding Fathers to Confederate traitors and Civil War criminals. There can no longer be a moment of hesitation from either democrats or republicans that Trump is unfit for office. The rest of the world is watching, and speaking what America’s leaders should be saying.

Trump accused “alt-left” activists and protesters of trying to rewrite history for supporting the removal of Confederate era artifacts from public places. As the alleged leader of a free democracy, Trump should know that Americans are not trying to rewrite history. They are attempting to right the wrongs done in the past, and if he had a moral compass, he would recognize the importance of that task. To see history rewritten, and wrongs likewise righted, Trump need only wait for the day he is impeached.

We will say it again for the leaders who are still uncertain: Donald Trump is a dysfunctional ignorant narcissistic racist. He is not fit to lead America and 535 more voices must join the 260 million already saying so.