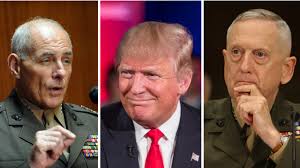 The only thing missing from Friday’s Department of Justice press conference were armed and uniformed members of Donald Trump’s new authoritarian regime. As Trump begins to tighten the noose on American freedoms, he advocates the use of force (urging police to ‘rough up’ suspects) and relies on military generals as advisors in ways that are unprecedented in our nation’s history.

For over 240 years, America has been a civil democracy where elected leaders and civilian appointees make government decisions and set policies commensurate with constitutional mandates. In the early stages of the Trump era, however, the nation is experiencing an increasing shift to military style totalitarianism. The people with the tanks and guns — instead of the brains — have an emergent role in advising Trump on how to control, rather than lead, the nation.

The Trump regime’s crackdown on leakers, whistle blowers, the press, and long-standing First Amendment traditions is leading America down a dangerous path into a dark forest. Restraining the free flow of information has long been a key weapon in subduing and controlling populations. Today in China, the government is blocking almost all social media, Google, WordPress, and media outlets like the New York Times and Reuters to check public enlightenment.

Governments that limit freedom of information are often the same ones that abuse human rights, engage in illicit and illegal activity, and suppress individual expression. They are spoken about in the United States of America as “communist regimes” and “police states” among many other less flattering names. When America’s leaders discuss nations like North Korea, Cuba, and Russia, it is usually in the context of places where the seeds of democracy need be sown.

Our own garden, however, is choking on Trump’s toxic manure.

Trump opponents likely remember former press secretary Sean Spicer whining in January that Twitter users should stop mocking Trump on social media. With this week’s added threats of prosecution of leakers, and harsh warnings for the media, it seems more and more like Trump is moving towards an authoritarian lock down on First Amendment freedoms. How long will it be before Trump’s generals attempt to shutdown Twitter, Facebook, or Instagram to limit online criticism of “Beloved Leader?”

Both the Fourth and Fifth Estates have distinct and necessary objectives in maintaining the future of America’s democracy. If the nation is to emerge from the Trump era with its rights and freedoms intact, the press and social media communities must focus their efforts and resolve. They must strive not to cave under the regime’s threats of punishment for mere acts of patriotism. It is essential that the media, with its access to leaked information, the country’s leadership, and trusted sources continues to expose and inform each American of Trump’s every step and misstep.

No less important are the millions of mothers and fathers, professionals and students, and late-night-bloggers, who, unpaid and oft not rewarded, lay their opinions and observations bare for the global digital community. Collectively, anti-Trump sentiment runs as deep and wide as the oceans, and includes individuals from all walks of life associating with each other via hashtags like #TheResistance, #ImpeachTrump, and #25for45. It is an empowering and driving force for change that unites a nation whose people value their rights and freedoms.

Any daily Twitter user could likely offer expert opinion on why a nation like China banned the world’s most popular communication platform; and why Donald Trump is so scared of it — despite relying on Twitter to reach fan club members with his self-styled “truths” each day between 4:00 and 6:00 a.m.

For those who are skeptical about the direction in which Trump and his generals are taking the nation, follow the lead of Amy Siskind. A former Wall Street executive who is the co-founder and president of The New Agenda, Siskind began documenting the minor changes in America following Trump’s rise to power. For 37 consecutive weeks, she has been posting weekly additions to her long and detailed list of authoritarian style changes that she has noticed. Each post has the ominous caption that advises to keep the list “so you remember.”

Siskind’s list has grown to a book-length read as she scrutinizes the Trump regime at every move. Hers is a valuable lesson for Americans who may be too busy, too distracted, and too careless to understand that coups do not always happen overnight. The subtle changes that Siskind documents are worthwhile concerns and warnings for each person who wants to not only remember, but also not have to rely on memories of freedoms we take for granted.

Trump has been in office for six months and the most notable change is the atmosphere of hostility, anxiety, and fear on every corner in America. There is a sense of uncertainty that cannot be qualified or quantified for many, but it lingers ominously. While it is difficult to identify a gut feeling, an air of danger is often the best indication that something is not right — and when the wolf if prowling at night, just because you do not see it, does not mean it is safe to close your eyes. If you are tired, America, sometimes making lists is a good way to stay awake…