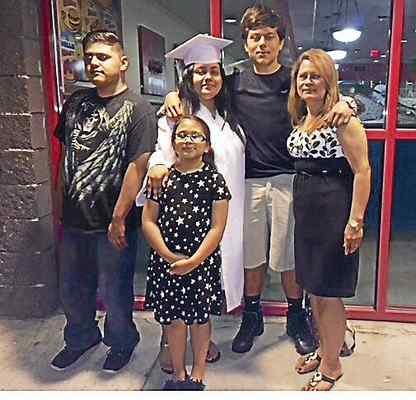 The power and patience of the federal government is being tested this weekend in New Haven, Conn. A tense standoff between Immigration and Customs Enforcement officials and a Guatemalan national has extended to include the city of New Haven and a local church along with Connecticut state representatives.

On Friday, ICE officials declared Nury Chavarria a fugitive from justice, which is a bit of bureaucratic irony since Chavarria is the party seeking fair and humane treatment. Chavarria has been living in the United States for 24 years since fleeing from Guatemala in 1993 when she was 19-years-old.

ICE officials ordered the 43-year-old mother of four to purchase a one-way ticket to Guatemala and leave on Thursday. She would be barred from reentering the U.S. for ten years. Instead of abandoning her four citizen children — ranging in age from nine to 21 — Chavarria instead took refuge in the Iglesia De Dios Pentecostal church in New Haven. She remains there with her 9-year-old daughter while volunteers, activists, and Connecticut government representatives urge the federal immigration agency to reconsider its position on Chavarria’s removal.

The case highlights the growing tension between states seeking to do the right and humanitarian thing, and federal agencies operating under the Donald Trump’s xenophobic regime. While immigration matters fall within the purview of the federal government, a growing number of states and municipalities are refusing to participate in anti-humanitarian policies advocated by Trump. The discord has given rise to a growing number of sanctuary cities and states, of which New Haven and Connecticut are both.

From the beginning of his rise to power, Trump has been a boisterous and ignorant advocate of his own anti-immigration policies — especially concerning both Hispanics and Muslims. During his 2016 campaign, Trump referred to Latin American immigrants as “bad hombres” and vowed to build a wall between America and her southern neighbors to keep undocumented aliens out of the country.

Nury Chavarria is a good mother and not one of the undocumented bad guys Trump rants about regularly. Her oldest son suffers from cerebral palsy, and she works diligently to care for him and three other children — all legal citizens. She was denied asylum from her civil war-torn home, but has been granted stays of deportation on humanitarian grounds since 2010. She has paid taxes, checked in regularly with ICE, and is not a criminal. None-the-less, she remains a target of Trump’s racist and nationalistic cleansing to “Make America Great Again.”

In June, ICE denied Chavarria’s latest stay of deportation and gave her less than 30 days to purchase her plane ticket to Guatemala. On Wednesday, with the help of Senators Chris Murphy and Richard Blumenthal, Chavarria hoped for another reprieve that did not come. Rather than report to the airport on Thursday, she chose instead to seek refuge in the New Haven church and became a fugitive for a cause — her children and her American dream.

Like the boy who cried wolf, Trump has been spreading fake news to sway public opinion and support for his personal beliefs and a political crusade of bigoted and inhumane policies. Nury Chavarria and her family are one of the many innocent undocumented Americans caught in the snare.

While Chavarria awaits her fate in a small room in the church, politicians, activists, and the New Haven community have rallied around her cause. Though labelled a fugitive by ICE, there is speculation that ICE will not attempt a forced extraction while Chavarria remains in the church since recent enforcement policies frown on immigration actions in churches, school, and other highly sensitive and visible public places. Several lawmakers have called ICE’s treatment of Chavarria repugnant and inhumane.

Once considered a home for refugees and asylum seekers, the United States is playing an ever-decreasing role in accepting those displaced by violence and humanitarian crises in their home nations. Based on total people of concern versus native populations, European nations — France and Germany especially — and 100 other countries open their doors more often than America.

Many displaced persons seek asylum in the United States claiming violations of the Convention Against Torture in their home countries. The CAT covers a broad range of conditions that may or may not qualify for protection and is open to the interpretation of an immigration court. In Chavarria’s case, Guatemala was in a state of constitutional crisis and political uprising when she left the country. The aftermath created years of instability and immigration judges sided with Chavarria for nearly seven years, granting stays of deportation for humanitarian reasons.

However, during her annual ICE check-in in June, Chavarria received the devastating news that her time in America had finally expired and no further stay was granted. The political pressure of the Trump regime may have finally reached the bench of the local immigration court and ICE office.

While the showdown in New Haven continues, Chavarria and her 9-year-old daughter rely on the kindness of strangers and volunteers to ensure a happy future. MoveOn.org has begun an online petition, and lawyers are exploring legal avenues to allow Chavarria to remain with her children who rely on her love, care, and income.

The humanitarian crisis facing the Chavarria family is just one example many and of the tenuous nature of life in America under the Trump regime — a call for help and the return to relaxed, informed, and humane policymaking. It is a cause that a certain immigrant who has gained sway and influence in America via her own journey would be wise to represent…someone who married into America for money and fame who could redeem herself with just one reciprocal act. It is too bad that woman’s husband is too much of a misogynist bigot even to listen to her.