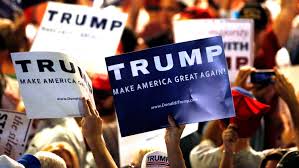 Donald Trump makes us angry. He makes the opposition and the resistance angry because of his boorish mannerisms, attacks on the fundamentals of democracy, and his incoherent ramblings that allege to simulate some form of so-called leadership. He makes his own supporters angry with the resistance by using his same lack of manners and third-grade speeches to pretend that he has some interest in democracy.

Everywhere he goes and each time Trump opens his mouth, the central focus is the same. He relies on the worst experiences of humanity, society, and history to drive a generalized message of despair and hopelessness. And then turns the attention so his fans perceive him as the provider of hope, revival, and salvation. He thrives on the idea that Trump is a giant among men, larger than his own hands could embrace.

Trump’s speech yesterday in Warsaw featured the same formula that we have been listening to since 2016. During the Republican National Convention, Trump rallied the crowd by telling them he alone could solve Washington’s gridlock and the nation’s problems. Throughout his campaign and the early portion of his regime, he has asserted several times that he could single-handedly wrangle the intricacies of the Oval Office.

We went from a super cool President Obama to this confused MORON who can’t find his limo in front of him.😀🤣😂😃⬇️⬇️⬇️ pic.twitter.com/KVsD8MMIqn

Speaking to a small crowd of only a few thousand, Trump adhered to his elementary school speech-writing formula. He repeatedly emphasized the darkest points in Polish history. The mostly ethnocentric spectators, bused in by the right-wing Polish majority party PiS, cheered for Trump and waved Make America Great Again signs — as if Poles at home had clung to some vested interest in last November’s U.S. politics.

From Trump’s labelling the first lady as America’s greatest ambassador to the frantic rent-a-crowds, the speech evolved as another Orwellian portrait of a man determined to force his country (and maybe to world) to bow in homage. As so many Twitter users have noted of late, “This is not normal.”

Interspersed with his dark and rambling Polish history lesson — that mentioned Poland’s “constant and brutal attacks” and graphic references to Soviet and Nazi invasions — Trump also shared his focus with the tools of American democracy. If the Trump regime’s record at home were not so abysmal, his remarks would have been laughable.

As it is, his comments only emphasized the declining condition of the United States. Like all Trump speeches, the Warsaw commentary further demonstrated that Trump has no conviction whatsoever. He merely speaks to a crowd, instead of for a cause — unless of course that cause is applause to his own ego. It is no surprise that PiS supporters cheer for Trump during a time when Poland is facing the same national crises as the United States: xenophobia, ethnocentrism, and the abandonment of democratic ideals.

Towards the close of his speech, Trump slipped more and more into the fervor of the crowd, and the first person plural — aligning him with the live-track studio audience. His eyes flickered with imagined memories as Trump attempted to convince himself and the crowd that he had somehow, somewhere, been part of a struggle.

America no longer has a president. Our nation has a showman…a reality television icon. He is a washed-up popstar with a loose screw who peddles America for a moment of applause. He is like an addict — only his fix is attention and like an addict, he will say anything for a happy crowd.

When Trump said, “We want God,” during Thursday’s speech, a casual observer could almost see the light go off in his enfeebled mind. “We want God,” he said, looking at the crowd, and thinking of himself as a savior.