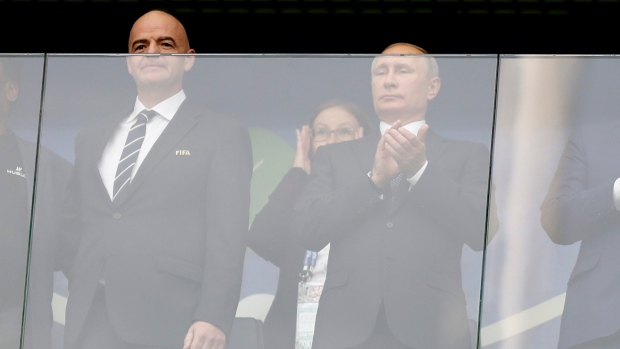 Yesterday, Russia defeated New Zealand in the first round of the FIFA Confederations Cup in St. Petersburg. Russian president, Vladimir Putin was among the more than fifty-thousand spectators who cheered the home team’s opening match in the tournament.

Though Putin’s title is president of Russia, western democratic leaders often compare his office to an oligarch or dictator. Putin has a poor reputation for human and civil rights abuses, a totalitarian approach to ruling, and a penchant for intolerance and violence. He is responsible for invading Ukraine and annexing Crimea and a long list of other known and unknown crimes. He is a former hardline KGB agent with a net worth that is disputed and in the broad range of $1 to 200 billion.

As miserable as his leadership qualities are, it cannot be said that Putin is not proud of his accomplishments or his country. He is frequently spotted in and out of Russia to show his support for all things Russian. Putin displays his Russian pride for the world to see and sometimes ridicule. Despite having a hand in everything, he makes time to support a serious soccer underdog at the Confederations Cup: team Russia.

Donald Trump cannot even carve out a few hours to support his Washington, D.C. colleagues at a softball game.

Throughout the 20th century, the world has witnessed the rise and fall of at least a dozen infamous dictators. For many, public appearances have played key roles in their visibility, fanaticism, and ability to stir and incite the masses they attempt to control. Others have relied on sport to spread their influence.

In 1936, an American sportswriter, John Tunis, described Benito Mussolini’s use of Italian sport in his regime. Tunis asserted that, “Sport becomes just one branch of army training and keeps the younger and naturally insurgent elements of the community from thinking too much about internal political conditions and lack of employment.” As an example, Mussolini seized on soccer’s popularity and the 1934 World Cup to emphasize Italian supremacy and underscore his fascist messages.

Likewise, in 1936 Adolf Hitler sought to display the German uber-race at the Berlin Olympics. Hitler applauded his Aryan athletes from a box shared with other Nazi officials. Though Austrian by birth, Hitler supported all things German with zeal and exuberant fanaticism.

Perhaps no dictator has shown more enthusiasm for his country than Mao Tse-tung. The Chairman of the People’s Republic demanded a billion Chinese to excel at every task, and propelled China’s reputation onto the world stage for its sport, industrialism, beatings, and prison camps.

In every instance of oligarchical, totalitarian, and despotic rule, destructive leaders have demonstrated an over-stated pride in their country. They posed for the crowds and cameras to advance clear and convincing messages of authoritarian power: My way is the best and only way.

Vladimir Putin continues a long-standing Russian and dictatorial tradition of cheering his teams. While we do not condone, respect, or envy him, he exhibits an undeniable passion and pride for his country. He may beat his team for not winning, but Putin will undoubtedly have a seat in the stadium to see them lose. It is what zealots like him do.

Donald Trump shares many qualities of dictators, but he will never be one — much the same way being president eludes him. Trump is enthusiastic for coal, for rallies paying homage to his ego, for his private clubs and developments, and for the largeness of his signature on so many meaningless pages. His ersatz enthusiasm to Make America Great Again never gained widespread appeal and has become thoroughly unconvincing.

As Putin is so enthusiastically Russian, Trump is so distinctly un-American in everything he does. His dispassionate and practically non-existent appearances anywhere except his private golf courses have removed Trump from the realm of even great zealots. He is neither president, nor dictator, though he likens himself to having the qualities of both.

Whether Trump survives his term or faces impeachment, he will never rise to be the leader that he mistakenly believes himself to be. His lack of energy, charisma, and passion for the nation as a whole will always impede any aspiration to lead. Trump’s desire to be Trump is what ultimately will remove him from the history books as any kind of leader — good or bad, president or dictator. Moreover, it is a sad day in America’s history when any person looks across the globe, and in the satiric choice between dictatorial Don and plutocrat Putin, says, “Dos vedayna, Don.” People want a leader who takes pride in more than his hair.