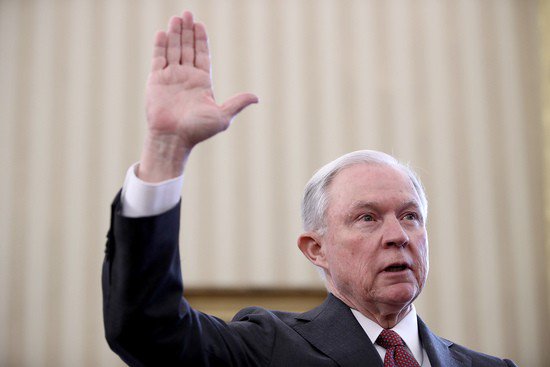 Living up to his stature, Attorney General Jefferson Beauregard Sessions said very little during his testimony on Tuesday. After opening statements that painted a dismal picture of the United States as a nation embroiled in drugs, gangs, and crime, Sessions the Napoleonic lawman proceeded to invoke imaginary legal privileges to avoid answering for his own alleged miscreant activities.

A vicious cycle of untoward and criminal activity does consume the nation, but our communities are not the wastelands of decay and street vice that Sessions and his boss like to portray. Instead, what our leaders must correct is their own consistent and criminal exploitation of the American public and Washington corruptness as a whole. A country can only be as good as its leaders.

Though they may not be called gangs, the political appointees, business associates, cohorts, and family members that have usurped positions of power among Washington, D.C. insiders are very much the new gangs of America. They function in secrecy, under the auspices of sworn loyalties, and for the benefit of the group, rather than the American public.

Mark Twain once said that if a person wished to observe the dregs of society, they need only visit the local jail during the changing of the guard. His broad condemnation of those in positions of oversight, but with none to answer to, echoes loudly in today’s authoritarian-leaning government. Washington gangs have become so emboldened as to protect their own that, regardless of title or power, are still accountable for their actions.

Sessions’ selective memory and refusal to answer questions with impunity for want of unspecified privileges is perhaps the most significant example of Washington corruptness in the modern era. It is corrupt not only because Sessions believed he had a right to refuse, but also because no person in authority could or would hold him accountable. When combined with his perception of America as a crime-ridden badlands where everyone deserves the maximum punishment, Sessions position as chief prosecutor should strike fear in the hearts of every person.

The tendency for Washington’s elite to govern with immunity from the constraints of rules, regulations, and law has been a growing concern in the age of big government. However, since the rise of Trumpism there is an accelerated urgency to isolate the leadership and to grant unconditional license to gang members — the few handpicked men and women — who decide the nation’s fate.

While Sessions and his colleagues congratulate each other on duping the public and while Congress continues to dismantle American health care in secrecy, random crimes will happen on the nation’s streets. Those crimes, though they may be personally traumatic for victims in Boise or New York City alike, will not have the impact of the crimes committed by one president, one attorney general, or by the Gang of 535.

Men and women turn to crime for various reasons — some for need, some for lack of morality and values, some out of desperation. Their acts do not warrant the dismal portrayal of America by either Sessions or the president. However, when a majority of Congressional members are millionaires and of a privileged class in America, their collusion in crimes against the public rise to a level more serious than any street crime Sessions may describe.

While Twain used the analogy of jails, we could rightly say that to observe a nation’s underbelly, one need only look to its capital and government. Remember, he also wrote “It could probably be shown by facts and figures that there is no distinctly American criminal class except for Congress.” His words ring truer today than ever before.