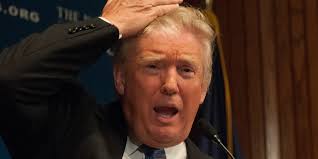 While vacationing in Florida in April, president Trump’s motorcade made a detour…kind of like the entire country did when he stole the election. Trump’s detour, however, was not because of a sinkhole that opened in front of Mar-a-Lago, or to avoid street flooding caused by global warming and rising sea levels. The president was simply too much of a coward to face any of the protesters along his route on April 15 — tax day.

In May, reports surfaced that Trump had begun blocking Fifth Estate bloggers and opinionated Twitter users whose stinging commentary left too much of a burn on the president’s hyper-sensitive skin. The threat of a Trump block quickly became a badge of honor among those diligently seeking to restore America’s voice of reason. The ACLU and other organizations debated the constitutionality of Trump’s egotistical crock blocking — contributing to Trump’s ire.

Now, before his proposed state visit to the United Kingdom, Trump has offended yet another U.S. ally because he is too delicate and afraid of possible spirited protests. Londoners and Brits across the land are celebrating as if they had just repelled Hitler’s Luftwaffe.

A fundamental tenet of any democracy is that elected officials must listen to and hear the many voices of a nation. In the global context, a modern president must accept that various opinions will follow beyond America’s borders. As the embodiment of democratic values, Trump has a duty to expect and foster free expression wherever he travels.

It is equally fundamental, though unwritten, that democratic leaders — foreign or domestic and especially those in the Twitter era — understand that peoples everywhere will praise and criticize them. Moreover, it is a given that the scales are not often likely to show a balance between the two.

Based on Trump’s recent frailty in the face of protests and criticism, it is difficult to imagine him as the self-described giant in the cutthroat world of late 20th century Manhattan real estate. Perhaps Trump’s skin is thinning with age, and failing him at a time when he most needs it.

Perhaps the president’s hesitation stems from the idea that Trump himself is but a novice critic and mudslinger. His childish rants lack the refined and complex creativity that a more educated and intelligent adversary might employ. He engages in elementary-school playground insults and banters on Twitter with remedial fragmented thoughts — much in the same way his base responds to the media, press, and Muslim Americans.

If Donald Trump’s constitution has deteriorated to the point where he cannot endure a bit of verbal pushback and the mildly vulgar gesticulations of a few protesters, it is time to ask the more serious questions. Trump is a man who ridicules the likes of Sen. John McCain — a veteran and P.O.W. who suffered in enemy hands — but he certainly could never have endured McCain’s torment. With such friable armor, it is a wonder that Trump survived the sex-crazed hell that he has described as his personal Viet Nam.

The nation and its jelly-kneed leaders in Washington, D.C. are approaching a critical juncture very early in the Trump saga. As tensions rise in the Middle East (thanks to Trump); as allies retreat from traditional bonds (thanks to Trump); and as Americans become increasingly divided against each other (do we have to say it); someone has to step forward and grab the loosed reins.

Figuring out what to do with Trump is like trying to care for an aging pet. At what point does the country seriously consider impeachment as the kindest available euthanasia of the administration? American and Trump both deserve at least that kindness and mercy. The alternative is to wait another year for when the president’s cabinet and inner circle finally realize that Trump is incapacitated because of his thin-skinned mental state.

In that scenario, the result for Trump and country would be more devastating and embarrassing than impeachment. Invoking Section 4 of the Twenty-fifth Amendment would leave a darker and more nefarious stain on our democracy.

Impeachment holds a humiliating connotation for the United States. However, the process demonstrates to the world that democracy is a well-maintained and functioning machine that self-corrects anomalies in the normal procedures. A Section 4 removal — especially before mid-term — is less complimentary.

In the case of Trump, it would reveal an exploitable failure in the electoral process…a failure that any enemy could capitalize on with a well-funded dummy candidate. Removal would tell the world, “Look, democracy is so great, we elected a crazy man!” Not our best selling point on the global stage.

Impeachment saves face for the failing Trump as well. To vilify and demonize Trump or to rally against him for his crimes and indiscretions would at least satisfy his primal urge for attention. An action to remove the infirm, skinless, and fragile old man would likely infuriate and strike at Trump’s deepest feelings of resentment and only steel his resolve against America.

We generally do not endeavor to sink to Trump’s level, but sometimes it is easier to reach an adversary in his own language and perspective. The president has delusions and imagines himself as a giant among men — an invulnerable fortress of power and wealth. To this, we say, in the president’s language, “Donald, we are the many losers of America. Like great guy Jack — we will use our tinly axes and our tenacity to bring downly your bigly CRAZY beanstalk! SAD!”