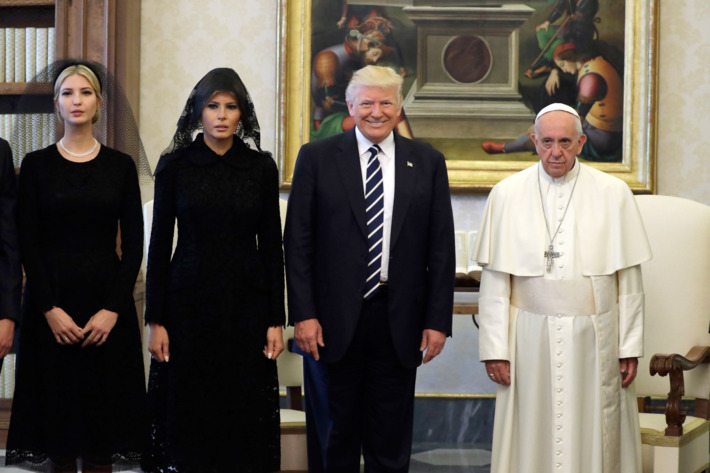 Not since George H.W. Bush’s infamous trip to Japan 25 years ago has a U.S. President made such a poor impression with America’s overseas allies. When Bush vomited on Japanese Prime Minister Kiichi Miyazawa in January 1992, the press reported the incident as one of the most embarrassing moments in U.S.-foreign diplomacy. Many thought Bush would never be out done.

That was before Trump arrived and opened his mouth. In what is likely to go down as the longest episode of remedial retching in political history, Trump’s verbal vomit is a national embarrassment that has not let up since he took office.

Trump had barely returned from his jaunt through the Middle East and Europe when he reignited his insane pattern of dementia-ridden tweets. In the boorish manner America has come to expect from its so-called leader, Trump renewed his shouting on Twitter with attacks on the media. In what has become a common fascist Trant for the past six months, Trump again tried to convince America that all news that he disagrees with is “fake.”

He crowed about his “great” accomplishments in the Middle East and Europe, too. In typical Trump fashion, his tweets are failing in concrete facts, and bigly on simple abstract hyperbole. Trump let America know that “money is beginning to pour in” (to where?), and that he was “bringing hundreds of billions of dollars back” (to his bank account?). Then there were “JOBS, JOBS, JOBS!” (how many and what kind?) and, of course, the all-encompassing, “big results!”

Most of his announcements convey a certain hollow meaninglessness since Trump’s vocabulary is limited to a few emotion-driven monosyllabic words intended to capture his audience’s attention before he moves on. The president is an elementary school huckster peddling snake oil on the playground. Like all of his Trants and Tritters, most end with Trump’s guaranteed truth serum — an exclamation point.

If the Washington Post or New York Times added myriad exclamation points to their well-investigated and trusted journalism model, Trump loyalists might finally see the truth!

The truth is ugly only five months into Trump’s term. That was evident in the speeches, body language, and photo-ops throughout the president’s first foreign tour. His addresses seemed poorly written and divergent from any core policy. European leaders grimaced in Trump’s presence — when he wasn’t riding in a private golf cart or shoving them aside. Even the Pope stood by glumly while Trump grinned like a Cheshire cat. Never mind the glowing orb of death in Saudi Arabia. From Melania’s hand slaps, to Trump’s pawing gropes at Sara Netanyahu; everywhere Trump went, there seemed to be an awkward churlishness conveyed in videos and accounts of his visit.

Back home in America, it was a week when — despite the administration being embroiled in controversy — everyone seemed breathe a sigh of relief while giggling lightly and saying to one another, “It’s okay…he’s not here.”

The problem with Trump remains that he simply is not presidential material. The office of president is a humbling job where personal gain takes a back seat to altruism, which is a trait Trump could not possibly buy with all his billions. It is a leadership position that requires dignity, self-respect, and tact — each of which was demonstrated by Trump’s hosts throughout Europe and the Middle East.

It is ironic that Trump’s loyalty base is the same demographic that can remember more than just one past president and how they have acted. As far back as Presidents Reagan or Carter, voters should recall how every president of the past 40 years carried himself. They should consider the calm and dignified manners. Think about the thoughtfulness of speech and the use of vocabulary. They should examine how each conducted himself in awkward times. Every single president before Trump has had an awkward moment, but has recovered from it because of their presidential nature.

George Bush vomited on the Prime Minister of Japan and made a poor impression across Asia, but he did it humbly and while heroically fighting his body’s natural reaction to illness and stress. If Trump vomited on a world leader, he would do it with anger, blame, and ridicule, followed by loud guffawing like a bad stand-up at his own jokes. At least Bush had an excuse for what came out of his mouth. Sadly, there is no excuse, either for the bile that spews from Trump’s mouth, or for the crude impression that he leaves wherever he goes.