This week, visual artist and activist Robin Bell elevated the modern art of resistance. An outspoken opponent of the Trump administration, Bell combined creativity, technology, and political messages to accomplish what has only been possible by vandalism in the past.

Bell used projectors to cast high-resolution images onto various buildings and monuments around Washington, D.C. In one slide focused on the Department of Justice façade, Attorney General Jeff Sessions appears in a Ku Klux Klan robe with the hashtag “SessionsMustGo.” For other anti-Trump and anti-Sessions activists, the image is both welcome and exciting.

In contrast, for Sessions and law enforcement agencies, Bell’s ingenuity is a grating reminder that regardless of titles and authority, they are ultimately powerless against human resolve, against resistance, against the core principle of America: Freedom of Speech.

In eras of political unrest during the 1960s, through the Nixon scandals, and even up to early opponents of George W. Bush, technology remained unavailable or too expensive as a tool for average protesters. It has always been easier and cheaper to spend $1.99 on a can of spray paint to send a message. Once activists vandalized public or private property with Day-Glo painted messages, they were criminalized and denounced. Every painted message detracted from legitimate grievances against the government because law enforcement villainized the jailed messenger as merely a delinquent.

Bell’s visual protests demonstrate how the tables have turned, tilting the balance of power in favor of the resistance. In the sometimes-delicate balance between freedom of speech and destruction of property, freedom of speech wins where no damage accompanies the message. 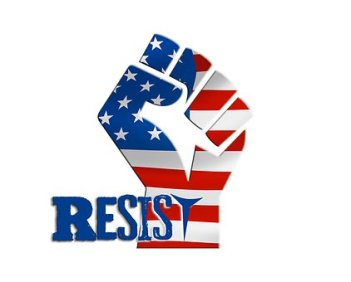 Digital resistance is the new marching civil disobedience. From online petitions to the @ResistanceParty Twitter feed; from instantaneously capturing HD-quality video of authoritarian misconduct to Bell’s projections, those who once had no voice are discovering tools to help them speak up. Digital activism is available to practically every citizen — with the added benefit of anonymity for those who would rather protest from the comfort of their living room.

As technology becomes more affordable and more widely available, digital resistance is increasingly based purely within the purview of First Amendment rights. As such, it places the government in the precarious position of being unable to suppress dissent without becoming an oppressive villain. When expression breaks no law, activists no longer risk being criminalized for an opinion. The government, however, will easily be condemned for trying to outlaw such tools as Twitter or light.

Robin Bell generates and spreads political messages with pure light. Whether that light shines on the street, a monument, the White House, or Trump Tower, it does no damage except to those who try to hide in shadows. Bell is neither a vandal, nor a trespasser. Bell has discovered a way to make a message visible during the darkest hour.

The people have found their voices. They have new tools. They have broken no laws in their righteous and protected expression. Let the light shine.